Below the main coffee processing phases that Verwerkaf performs.

Among the various existing methods of decaffeinization, VERWERKAF has chosen the one through ethyl acetate; the coffee obtained results to be considerably superior in aroma and fragrance than the other methods and is without any harmful health risks.

Decaffeinization of natural raw coffee is obtained by a process which includes the treatment with steam and ethyl acetate, a non-toxic solvent which is naturally present in coffee. Decaffeinated raw coffee can be produced on behalf of third parties with the transport of the finished product in sacks or tanks, or it can be produced in a range of different types and commercialised directly by Verwerkaf in 60 kg bags.
Decaffeinated coffee contains less than 0.1% caffeine.

At present the method applied includes the use of water and ethyl acetate ( a natural organic substance originally present in coffee). 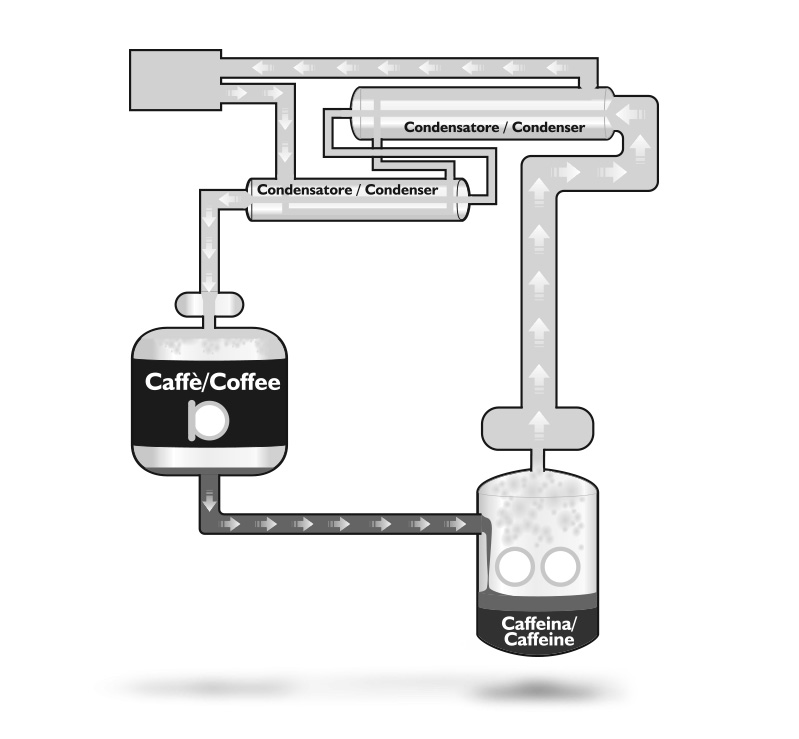 The preliminary treatment of the raw beans with steam provides the necessary permeability to the surface of the grains for the passage of caffeine within the grains. The decaf-process is carried out at a temperature close to the boiling point of ethyl acetate.

After the caffeine extraction is separated by distillation and the recovered acetate is used for other decaffeinizzazzione treatments. At the third stage of the excess natural organic matter present in coffee it is expelled with steam. At this point the raw coffee, decaffeinated and moist, is dried until the normal level of moisture, with a total weight loss of between 5% and 6% .

The coffee is worked through the roasting process which constitutes one of the most important stages of its preparation.

The degree of roasting varies according to the type of coffee, the cooking recipe is personalized (times and temperatures) and the final intensity of roasting by means of colorimetric measurement is kept under control for mixing: emphasize that an important part of the work is also the third parties, the mixture of the customer. Verwerkaf manages hundreds of customer-owned coffee types, ensuring everyone the protection of the privacy of your own recipe.

The roasting develops the aroma and flavor characteristics of the coffee.

In the roasting it takes place a rapid elimination of a large part of the grains (the final moisture content of water is approximately 0.1%); when the heat has almost completely eliminated the water, the temperature of the grains increases to give rise all'imbrunimento of the grains (a phenomenon known as the "Maillard" reaction). The beans increase in volume, they lose a thin outer skin and become hard and brittle.

They are formed during roasting a variety of volatile aromatic compounds: a substantial portion of these aromas is "captured" by the particular tissue "spongy" of which consists of the grain (in fact there are numerous and microscopic cavities that retain the aromas and allow leakage in part during the grinding and partly during the infusion of coffee). The roasting also makes the grain friable, from which easily obtained by grinding the powder from which prepares, by extraction with boiling water, the drink. In addition, in the course of this process, which involves the use of temperatures that sometimes reach 230 °, the component substances undergo chemical transformations. The degree of roasting varies depending on the customer's tastes.

When the beans are roasted increase in volume at the rate of 30-50% and lose weight by approximately 18-22%.

If exposed to air roasted coffee undergoes alterations that occur with loss of freshness and rancidity.

In order to avoid these drawbacks have been developed various methods of packaging designed to protect from the action of atmospheric oxygen the quality of the coffee.

Verwerkaf has plants able to satisfy any requirement of the customer.

The success of a mixture is given by a set of positive factors including the origin and species of coffee used, the preparation and selection method, the processing and packaging system. For this reason Verwerkaf selects each lot purchased on the basis of quality standards, to achieve a result of high reproducibility, we can meet all requirements posed by customers.

The experts frequently tasted the samples is deciding whether to buy, it is to define the right proportions of the components to be included in the blends. A correct succession of the various phases of control is a mortgage on the safe success of the finished product.

A coffee with high acidity is usually deficient of body, therefore, is combined with one that possesses this characteristic. A combination of strong coffee with coffee light avoids superposition or cancellation of similar characteristics preventing subsequent taste-olfactory interference.

In general, to have a good mixture, it must take into account three elements: aroma, taste and body of the drink.

Verwerkaf has specific experience on the different types of grinding used in the world (espresso, mocha, filter, french press, etc.).